I enjoyed my trip to Canada immensely, and because we did so much, I’ll break it down into separate blog posts:

First, I’ll detail our visits to Vermont and Quebec City. My friend Donald and I left Washington, D.C., around 2:30 p.m. on Thursday. We were able to avoid a good bit of traffic this way. Due to road closures and construction, the state of Delaware ended up being a huge pain for us, and we lost about an hour trying to figure out how to get on the interstate again.

Then, we got to southeastern Pennsylvania. Instead of taking the Jersey Turnpike, we opted to add a few miles to our trip and drive parallel to it, heading towards Allentown, Penn. We understood this might add time, but we figured it was worth avoiding the pricey tolls (Won’t you do something about this, future presidential candidate Chris Christie?) and bumper-to-bumper traffic that I know all too well on that road.

Unfortunately, driving through Pennsylvania was a total nightmare. Construction on narrow roads in valleys complicated matters, and, as expected, truck drivers recklessly navigating them made for one stressful experience. Finally, we got into eastern New York, through Albany and then to Vermont.

The roads we took in Vermont were treacherous, as the GPS took us down back roads almost the entire way. It was completely dark out and the fog was blinding, so we were happy to reach our overnight destination in White Junction, Vermont. We checked in our hotel, the Hampton Inn, and it was very comfortable. The next morning, we woke up early, and I hit the gym and Donald hit the continental breakfast. The hotel was a great value, and we’d both recommend it.

Some photos I took at the Vermont Statehouse.

We left White River Junction and drove to Montpelier. Our hour-long route was absolutely breathtaking – rolling green hills lined with pine trees and little rivers. We stopped for a brief self-guided tour at the Vermont State Capitol, which was wonderfully landscaped and featured the smallest legislative chambers either of us had ever seen.

Next, we made our way north to the Canadian border. What happened next will amaze you (it won’t, but in our Upworthy culture, I figured I’d keep you tuned in). We were stopped by the Canadian authorities for a “random search,” which I couldn’t help but assume was because I declared my profession, Congressional staffer, to their agent upon his inquiry. We stood in a glass lobby while we watched their border agents go through our suitcases. Without dramatizing the ordeal, it did feel a bit, well, intrusive. We did get a kick out of them pulling out my hot pink hair dryer and inspecting it, though.

After about 30 minutes of interrogation and search, we were on our way. This was one of the longer parts of the trip, but it was really neat to be quickly immersed into Quebecois culture and language. We even noticed how dramatic the deer looked on the yellow warning signs along the highway.

We arrived in Quebec City and checked in our hotel, the Best Western Plus Centre-Ville, located next to Old Quebec. The hotel was very comfortable and the staff was extremely helpful. We communicated in Franglais, and they were patient as I stumbled through my French.

After we unwound, we walked into Old Quebec. We spent a lot of time climbing giant hills, unnecessarily, as we later learned, because we didn’t get an exact address of where we were going. We ultimately settled on a restaurant, Richard’s, that was basically an American eatery with a Quebecois twist. The entree was just alright, but their poutine was absolutely delicious. 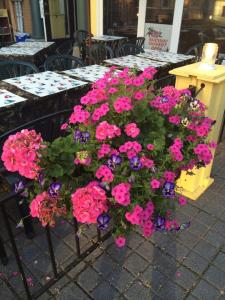 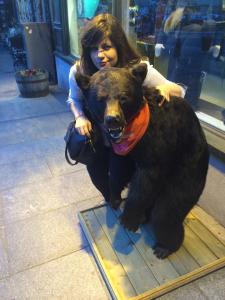 Here I am making a new friend in Old Quebec. 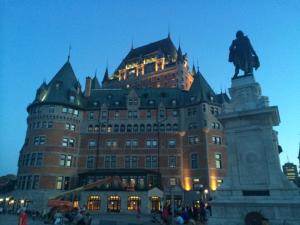 The beautiful streets (and stairways) of Quebec City. 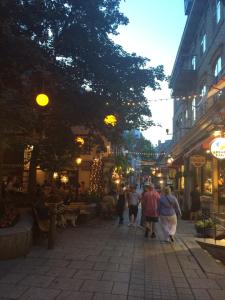 After our meal, we ventured into Old Quebec and enjoyed some lovely views of the old cathedral and their charming cobblestone roads. Donald mentioned it reminded him of Paris, and I can certainly see why folks say it is the most European of all Canadian cities. We ended up taking the Old Quebec Funicular, a railway to the top of the mountain, which offered a lovely view of the city and the St. Lawrence River. We wandered around there some and stopped for a few glasses of wine at the Chateau Frontenac, which is, rightfully, the most photographed hotel in the world. The atmosphere was fantastic, and the prices were reasonable. We really enjoyed visiting it. Shortly thereafter, we headed to a bar across the street from our hotel, where the service was absolutely horrible. After mini-pitchers of Carlsberg, we needed some shut-eye.

The next morning, we embarked on a guided cruise of the St. Lawrence River. The bilingual host presented lots of interesting facts and detailed the city’s fascinating history. The boat was extremely packed, but the weather was nice and it was definitely worth the ticket price.

After our hour and a half-long river tour wrapped up, we hopped in the car and made the drive to Montreal.